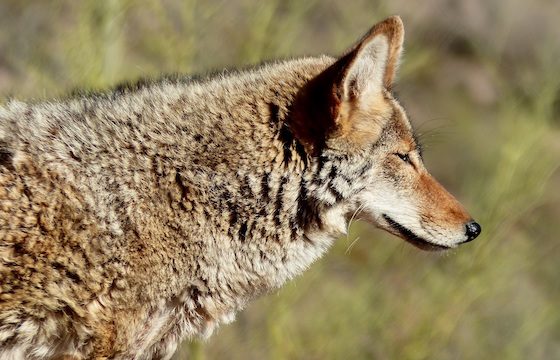 I saw the coyote peering back at me through the sagebrush. So highly attentive and tuned into the world around her, she was aware of my presence even with the window and adobe wall between us. With ease and grace, she turned away and disappeared among the trees. Even such brief encounters, like hearing the wild dogs sing in the night, are beautiful reminders of the wonders of life.

I fell in love with coyotes while living in the desert mesas in Abiquiu. My four-legged friend, Jasmine, opened the door to this connection. During our hikes through the red rock mesas and arroyos, we had daily encounters with the wild dogs. Somehow the canines worked out an agreement for sharing the land. Their negotiations took place through many seasons, much communication, and the cultivation of relationship with barking, howling, chasing, playing, marking territory, hunting for food, and tracking each others’ movements. Our human-and-dog pack and the wild coyote packs found a way to co-exist.

For many generations, humans have tried to eliminate coyotes. Yet the coyotes have not accepted this agenda for their lives. The wild dogs aren’t acquiescing, giving up or giving in. They flourish in all kinds of climates and terrains, weaving their relationships with life on the earth from the tropics to snowy lands, from the forested mountains to wide-open prairies. They have not persevered by seeking revenge or going to war against the humans. Coyote simply goes about being Coyote, uncompromising and ingenious in the quest to flourish and thrive.

Coyotes have an exquisite love affair with life. They’re calling us to join in the dance.